Of the many nicknames associated with New York City, ‘The Centre of the Universe’ perhaps best captures its standing as one of the world’s greatest cities. In addition to its eight million plus residents, over 50 million visitors pass through NYC every year, many of whom are keen to explore the landmarks and attractions in and around Lower Manhattan and Brooklyn.

Both areas are well served by public transport and dedicated tour buses, however, an alternative option takes you on a bike tour around some of New York’s most scenic districts and attractions. In recent years, the city has gone to great lengths to improve access for cyclists, and has become increasingly bike friendly thanks to the introduction of several miles of dedicated cycle lanes. So what better way to explore The Big Apple than on a pair of wheels?

In order to highlight New York’s excellent cycling and sightseeing offerings, Virgin Atlantic teamed up with urban explorer Nick Reale. Nick works as a guide for getupandride.com, a Brooklyn based bike tour company, and also runs his own site thisisnotreale.com. He talked us through the B-M-W bridges tour, one of his favourite routes which just so happens to include three renowned NYC architectural structures; the Brooklyn, Manhattan and Williamsburg bridges (B-M-W).

Not content with simply describing the route, however, we also enlisted the help of Michael Green from Bike Blog NYC. Armed with a camera fitted to his helmet, he took to the streets and filmed his journey along the B-M-W route. Check it out for yourself below and then read on to learn more about the landmarks, neighbourhoods and attractions featured in Michael’s video tour. 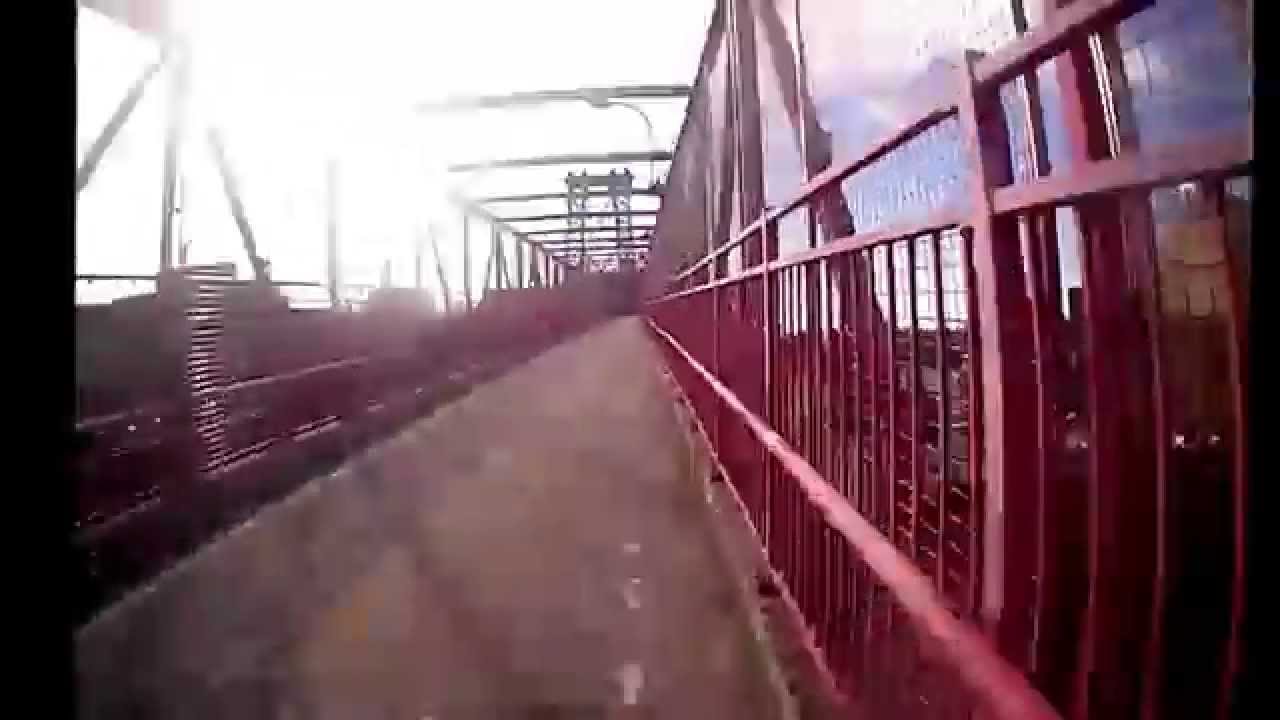 The B-M-W tour, which covers just over 12 miles in the space of four hours, sets off from City Hall in New York’s political heartland. From there it’s a straight road along to the Brooklyn Bridge, which was hailed as a miraculous feat of engineering when first completed in 1883. It represented the first physical link between Manhattan and Brooklyn and today over 140,000 motorists, cyclists and pedestrians use it on a daily basis. The pedestrian and cycle path is conveniently elevated above the road surface, enabling you to hop off your bike during the crossing to take a few snaps.

As you make your way into Downtown Brooklyn the route passes Borough Hall, which once served as Brooklyn’s City Hall. Up until 1898, Brooklyn was itself an independent city before it eventually formed part of the City of New York. It still very much retains its own identity and is home to over two million people, which would have made it the fourth most populous city in the country today.

Next up is Brooklyn’s Cobble Hill area, a quintessential New York neighbourhood of tree-lined streets, apartment buildings and a host of independent shops and cafes. Stop off at the delightful Book Court store on Court Street for a browse through their wide selection of literature, or order a coffee made from locally roasted beans from the classically trained baristas at the nearby Café Pedlar.

After your pit stop in Cobble Hill it’s time to cross back over the East River via the Manhattan Bridge. Modelled after the Porte St. Denis in Paris, the bridge was constructed in 1909 as part of The City Beautiful movement which took place at the turn of the 20th century, and the Manhattan Bridge design reportedly aimed to ‘make one feel as though they are a god or goddess ascending into the heavens.’ While we can’t guarantee a heavenly experience, the bridge’s dedicated cycling path certainly makes for a thoroughly relaxing crossing.

“Everybody ought to have a Lower East Side in their life.” The words of Irving Berlin, one of the greatest songwriters in American history, whom like many others fell in love with this quirky neighbourhood of Lower Manhattan. This section of the tour enables you to cruise through eight acres of green space known as the Sara D. Roosevelt Park, the most popular public park in the neighbourhood. Lower East Side has long been home to a variety of immigrant communities, making it a fascinating place to visit for those interested in trendy boutiques, international cuisine and a large cross-section of bars.

The route then continues east towards Williamsburg Bridge, an incredible structure built with over 17,500 miles of cable. In addition to motorists, cyclists and pedestrians, the bridge also carries one of New York’s many subway lines. One of the city’s most famous sons, the rapper Jay-Z, was born and raised close to the Marcy Avenue subway stop on this particular line. His birth name is Shawn Carter, but his Jay-Z stage name reflects the two subway services which stop at this station.

Much like the other two bridges, Williamsburg offers you unrivalled views of both Manhattan and the nearby Brooklyn Navy Yard, which was home to over 70,000 workers during the Second World War. Elsewhere, the neighbourhoods of Fort Greene and Clinton Hill are the perfect places to spend an afternoon. You’ll find yourself spoilt for choice when it comes to restaurants, bars and shops, whilst the streets have that stereotypical New York look which so often features on TV and movies.

The final stretch of the tour passes through DUMBO, a name which more often than not requires a bit of explanation: It simply stands for Down Under the Manhattan Bridge Overpass. The area has long been a hot spot for artists and creative types, with many having upped sticks from the Lower East Side in the 1970s in favour of this particular district. Today it is one of New York’s most expensive neighbourhoods, and a visit here also gives you the chance to drop by the Brooklyn Navy Yard. Here you’ll find Building 92, the Navy Yard’s welcome centre, which houses a museum showcasing the area’s history. The tour wraps up at the Fulton Ferry landing in Brooklyn Bridge Park where you can hop aboard one of the Waterways’ ferries back to Manhattan, providing you with some outstanding views of the city skyline in the process.

Take on the challenge of B-M-W cycle tour and reap the rewards of seeing some of the city’s landmarks on two wheels. From the marvellous architecture of the three bridges towering over the East River to the history and culture of some of NYC’s most interesting neighbourhoods, it’s an exciting way to explore one of the world’s greatest cities.

Feeling inspired? Check these out...

How to visit New York on a budget